Secret Philadelphia: A Guide to the Weird, Wonderful, and Obscure 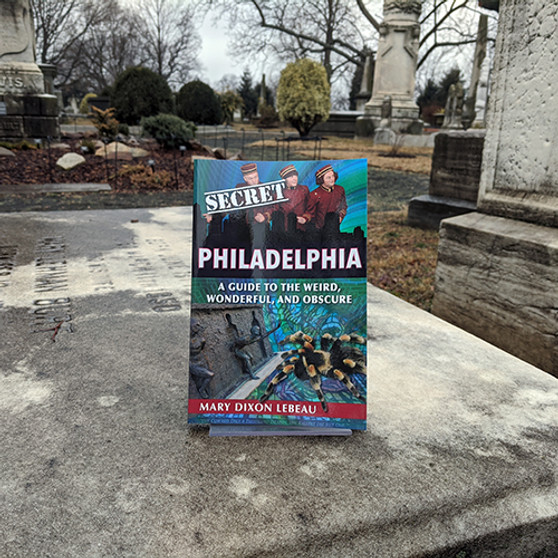 Secret Philadelphia: A Guide to the Weird, Wonderful, and Obscure

History and hermits. Museums and murals. Graveyards and churches and plenty of cheesesteak. These are the secrets of Philadelphia. They reveal a city of curious contradiction, one with a rich history dating back to 1682 but also with an eye on the future.

Come for the Liberty Bell, millions do, but stay for the secrets uncovered in Secret Philadelphia: A Guide to the Weird, Wonderful and Obscure. Journey to the places you've never heard of and back to those old haunts you thought you knew, but never like this. Discover where you can . . . Enter through a gate full of artistic hands. Peruse art between arrivals and departures. Throw a penny on a Founding Father's grave (and learn why you should). Sample a sandwich on both sides of the street. Learn how 19th-century surgeries were performed. Explore the cell where Al Capone paid his debt to society. Discover the cave of the first doomsday cult. Come face to face with the bird that inspired two famous authors. Follow the footsteps of famous boxers both real and fictional. Encounter the real heroes of the Revolution. Greet neighbors in the oldest neighborhood in the country. Roam through dinosaurs and walk away with a butterfly. See slides of Einstein's brain.

From the festive fantasy of the Mummers to the disturbing reality of the Mutter, Philadelphia is a city with stories to tell. Uncover your own favorites in the pages of Secret Philadelphia.

By Andy Waskie At the outbreak of the Civil War in 1861, Philadelphia was the second-largest city i…

By Thomas H. Keels Philadelphia, the birthplace of America, is the final resting place of some of t…

Wicked Philadelphia: Sin in the City of Brotherly Love

Philadelphia Spiritualism and the Curious Case of Katie King

In the wake of the Civil War, Spiritualism--and its promises of communication with the dead--reached…

100 Things To Do In Philadelphia Before You Die

100 Things To Do In Philadelphia Before You Die

Topped with dried rose petals and rose quartz crystal, this candle makes the perfect gift to someone…

Did you know we have a heart, and only a heart, buried at Laurel Hill Cemetery?  The heart…

Salve For Your Soul Bundle

The perfect gift for someone who can use a little soul soothing.  This bundle includes:  …

Reflect on what it means to "compose" with this unique writing journal by local artist Joanne Dhody.…

Support your favorite cemeteries and be safe! Perfect to wear for taking a leisurely stroll through …

16 oz. bistro mug with back and front imprint of LHC's logo.